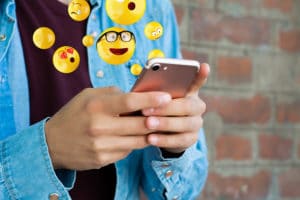 Litigation in 2019 almost always involves the use of social media evidence. Whether it is Facebook, Twitter, Snapchat or Instagram, people send and receive messages in a variety of places across the web. If your law firm is involved in case litigation, then social media evidence may be crucial for your case.

Even so, social media messaging is not always easy to understand. People converse by using a variety of slang terms, acronyms and emojis to convey a wide variety of thoughts and feelings. In particular, the use of emojis in recent years has grown exponentially, especially in courtrooms.

Santa Clara University law professor Eric Goldman has tracked every U.S. court opinion in WestLaw and LexisNexis that references emojis since emojis first made their debut in U.S. courts in 2004. Through 2018, according to Goldman, he had counted 171 cases that referenced emojis or emoticons. Out of these cases, 53, or more than 30 percent of all cases referencing emojis, were counted in 2018. By comparison, Goldman’s data shows that he only found six cases in 2010 that referenced emojis.

Could Emoji Use in Court Sway a Case?

In cases that contain a lot of online and social media evidence, the use of emojis can be a powerful piece of the puzzle. While emojis and emoticons have not been enough to sway the direction of a case, legal experts believe that may begin to change.

Emoji use is becoming a critical form of online communication and can convey a wide range of emotions from threats to sexual arousal. However, their use and intent are open to interpretation, and this could pose a problem for courts in the upcoming years.

In a recent prostitution case, prosecutors showed the court evidence that the defendant used a money bag emoji and high-heel emoji next to the phrase “teamwork makes the dream work.” Prosecutors argued that these emojis implied a working relationship between the woman and the defendant, who was facing sex trafficking charges.

In the end, the ruling did not hinge on the interpretation of the emoji. However, it provided a key piece of evidentiary support in the case.

To date, in the United States, emoji use has simply been a piece of the evidence gathered and is typically only an incidental part of a case. International law, however, is different.

Call our office at (877) 353-8281 to discuss your situation. You can also fill out our online contact form and someone from our office will be in touch with you soon.